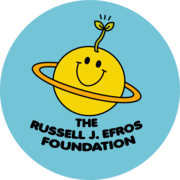 About Our Instructor: Sage Love

Sage has written, directed and produced numerous films which have screened at film festivals both in the U.S and overseas and are currently streaming on indie SVOD sites such as AppleTV, KweliTV and ShortsTV. Love creates films that challenge social norms and brings awareness to urban black communities; telling their stories with authentic representations.

As the producer of the first spiritual fantasy, Haitian Superhero movie, the critically acclaimed documentary “Ayiti: The Awakening,” and “VAKABON: The Series,” Sage Love aims to open up a new market within cinema surrounding Haitian stories in order to bring further awareness and enlightenment to Haiti’s roots; ultimately, bridging gaps between Ayiti and its diaspora.

The mission of The Russell J. Efros Foundation is to sprout creativity by providing direct support and community access to artists. Founded in loving memory of Russell J. Efros, affectionately known to his friends and family as ‘Russell Sprouts’, the foundation is dedicated to empowering artists to express their creativity and spotlighting the value of art and culture in our society. We do this by providing financial support to artists and creating a network for collaboration and exposure through events, programming and community outreach. To learn more about the RJE Foundation please visit rjefoundation.org.